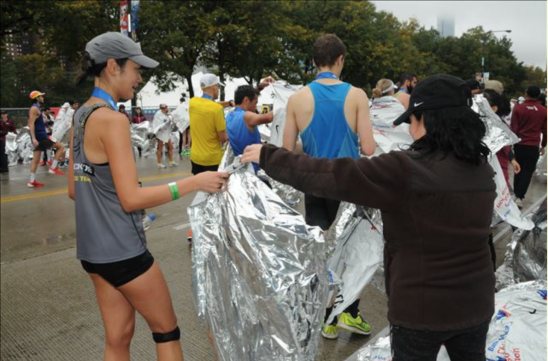 With a sea of slow moving, heavy breathing and salt stained hobbling bodies, one may think they have entered a zombie apocalypse. However, this real life scene of ‘The Walking Dead’ is something that all medical directors have experienced. As these half lifeless bodies slowly move through our finishing shoots they drag themselves toward a glimmer of hope, draped on mass, over tables. The shine of space blankets infuses these creatures with an essence of revitalization and the magical return of their vigour. But do these long used aids actually help runners as they try to infuse life back into themselves?

Endurance sport occurs in a variety of thermal conditions that can range from hot and humid to cold and dry, with every permutation imaginable in between. Race directors, and by extension, medical directors for running races attempt to equip themselves with processes and tools that offer a positive race experience to a participant while concurrently mitigating health risks. Over the years the cultural norm, particularly in endurance road races, of receiving a reflective blanket has been a tool to help mitigate excessive cooling in cold temperatures and overheating in sunny, warm climates.

With claims of reflecting ‘up to 90% of a person’s body heat and can be flipped to deflect external heat sources’1, it appears to be an easy choice when implementing a risk reduction strategy into a race environment.

As a medical director, it is important to establish runner safety protocols and best practices on science and published literature. These are the foundations of ensuring the the safety of runners in any race. As such, an extensive literature search was completed to identify if the implementation of reflective blankets in a setting, such as a marathon, is founded. What was surprising is that there is virtually nothing published in a sporting environment. Virtually all of the current literature documents efficacy of reflective blanket for use in the peri-, intra-, or post operative environment.

One literature review2 on ‘space blankets’ yields an interesting history. During the space race of the 1960’s, the space research organizations were looking to design a flexible ‘super insulator’. Not long after, the heat reflective properties of these flexible and compact sheets were used for survival purposes. The reflective properties of a space blanket can, in theory, work on the radiated energy emitted from the athlete.

As endurance athletes compete, they metabolize substrate and produce energy. This kinetic energy is what propels the runner through muscle contraction during the event. Humans, as we know, are very inefficient as upward of 75% of this kinetic energy is lost as thermal energy (heat)3. During an event, effective heat dissipation is key in maintaining core temperature in an athlete. There are two primary classes of heat loss in an athlete: wet and dry. Wet heat loss is due to the evaporative effect of sweat. It is the primary thermoregulation mechanism of the body and is effective in dissipating heat production which is produced during metabolism. It can account for up to 50% of heat dissipation4. The remainder of the thermoregulatory effects are as a result of ‘dry cooling’, which is the summation of the convective and radiant heat dissipation effects.

Upon reflection of the primary literature search completed, it is now more understandable why reflective blankets are used in controlled operative environments. There is mitigation of evaporative effects, and controls can be made for convective effects (i.e. the patient is stationary and can be wrapped). However, in a race environment, can reflective blankets help warm a runner? Literature yields zero data. Speculatively, based on human physiology and science, one would think that the warming effect would be minimal for the following reasons:

Perhaps the reflective properties could be disadvantageous in hot environments whereby a reflective blanket could increase core body temperature (CBT) when they are utilized in a hot, humid environment. A 2015 study5 suggests this is not the case. A randomized control experimental design compared the effects of CBT cooling rates in four post exercise conditions: no blanket, blanket, recovery walking with blanket and recovery walking with no blanket. The researchers attempted to bring the core temperatures of the participants up to a temperature that is commonly seen in endurance activity and then tracked cooling rates. They found ‘no significant differences in CBT cooling rates that would have been caused specifically by the reflective blankets’. Further, there was no evidence that the use of reflective blankets prolonged the cooling periods of runners. (Which would be the case if radiant energy was a significant component of thermo regulation AND it was being effectively reflected.)

In summary, there is no current literature to support the use of reflective blankets as warming aids in a race setting. It seems as if speculation has guided decision making rather than letting science be our guide. In fact, medical directors may want to consider the potential of detrimental effects to their racers. Is it possible that through the distribution of reflective blankets runners are being given a false sense of security and thus delaying their departure from race finish shoots? Could this potentially lead to increased hypothermic effects due to prolonged evaporative and conductive cooling effects? Let science be our guide… 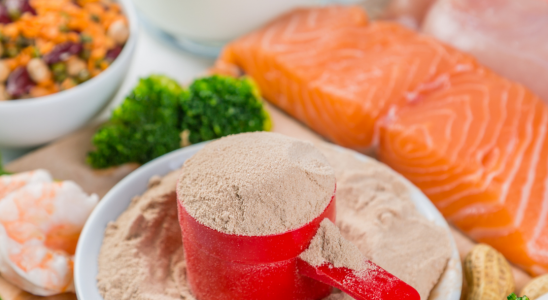 The Protein Conundrum In recent years, a heated discussion has been evolving in the world of sport sciences that has… 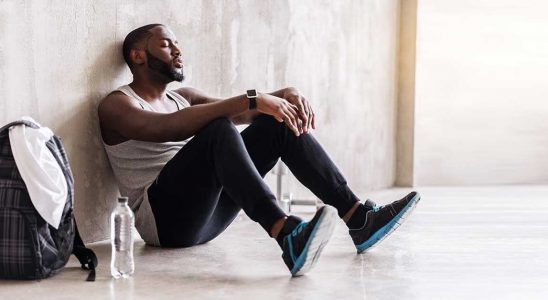 As a young person, we were taught that stretching before and after activity is something that will help us reduce… 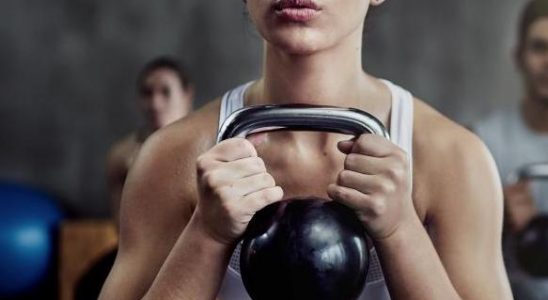 Estrogen is one of the primary hormones crucial for sexual and reproductive development in women. Within the medical community, this…

The Regulated Health Professionals at The SportLab remain committed to maintaining stringent Covid-19 processes to ensure your safety. We remain open and are available to help you with your health care needs and will continue to help you achieve your active lifestyle goals. Better, faster.